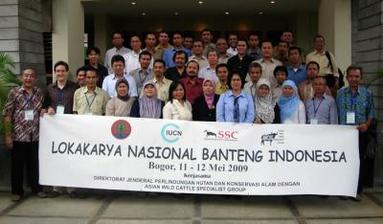 Over 110 Indonesian stakeholders met to agree 10-year National Conservation Plans for four of Indonesia’s most threatened species. These species are the banteng; two species of anoa; and the babirusa, a wild pig (the workshop for anoa included the babirusa as they share similar distributions).

All four species are threatened with extinction according to the IUCN Red List of Threatened Species. Poaching and habitat destruction and degradation are amongst the major threats facing these species. Also, the Directorate General of Forest Protection and Nature Conservation, Indonesia, has identified these species as high priorities for species conservation due to their threatened status.

Two workshops were successfully held. For the anoa and babirusa, endemic to the island of Sulawesi in eastern Indonesia, the workshop was held in the islands northern city of Manado on the 5th-6th May. The banteng workshop was held on the 11th-12th May in Bogor, Java, as this species is found in isolated pockets on Java and Kalimantan. These national workshops are a continuation of the Regional Strategic Planning for wild cattle and buffaloes of South-east Asia, begun at a workshop in June 2008.

These species act as important flagships for their respective islands. Additionally, they play a vital role in their natural environment by helping to maintain habitat diversity through grazing. They also represent a major reservoir of genetic material that could help scientists safeguard and improve domestic cattle breeds throughout the world. This is best represented by the banteng, which has a domesticated form – the Bali cattle - that is now widely used for meat and milk production across Indonesia and other south-east Asian countries.

Representatives at the workshops comprised government officials from provincial and national Forestry departments, local and international NGO staff, Indonesian zoo staff and academics. The workshops were hosted by the Indonesian Ministry of Forestry and the IUCN SSC Asian Wild Cattle Specialist Group. The two workshops were sponsored by Leipzig Zoo, Chester Zoo, Centre for Conservation of Tropical Ungulates, Los Angeles City Zoo, Opel Zoo, Stuttgart Zoo, Houston Zoo, Audubon Zoo, the University of Edinburgh, Wildlife Conservation Society, and Earthwatch Institute.
​
Amongst the outcomes from the meeting were 10-year National Conservation Plans for anoa, banteng and babirusa. Much needed information on the distribution of these species was provided by attendees and was collated onto maps as part of the Strategy and Action Plans. The launch and implementation in these Action Plans began in 2010, facilitated by the Directorate General of Forest Protection and Nature Conservation, in collaboration with the Asian Wild Cattle Specialist Group, NGOs and zoos. The Strategy and Action Plans are available here: 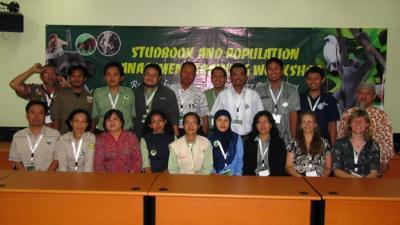 For those species at risk of extinction in the wild, a back-up population in an ex situ or zoo location can form an important part of effective conservation. This is becoming the case for a number of species that are native to Indonesia.

Over 40 Indonesian conservation professionals participated in the 4-day Studbook and Population Management Training Workshop at Royal Safari Garden Hotel. Professionals from the Directorate General of Forest Protection and Nature Conservation, Ministry of Forestry, the Republic of Indonesia and Indonesian zoos attended in order to enhance their knowledge of how to more effectively manage zoo populations, as part of a collaborative conservation effort. Eighteen studbook keepers participated in two days of intensive training in studbook keeping software and processes for ensuring accurate data for population management. 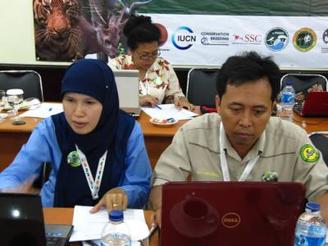 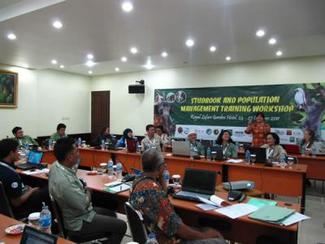 The main achievement of the course was that studbook keepers are able to develop and maintain Indonesian national studbooks for these species and to contribute the studbook data to the ISIS studbook library, as an integral part of management of the world ex situ populations for these species. Additional successes of the workshop were that several new studbook keepers were appointed by decree of Director General of Forest Protection and Nature Conservation, Ministry of Forestry; and mentors were identified to help coach the newly appointed studbook keepers after the course.

This workshop is one of the first outcomes of a prioritisation process which identified this activity as one of the top priorities for conservation of Indonesian wildlife. This process of prioritisation began with a workshop for Regional Strategic Planning for wild cattle and buffaloes of South-east Asia (see above), and continued with National species planning workshops for anoa, babirusa and banteng, held in Indonesia in 2009. The development of effective studbook keeping and ex situ population management expertise in Indonesia is also supported by the WAZA Javan gibbon Global Species Management Plan (GSMP) and the Sumatran tiger GSMP. 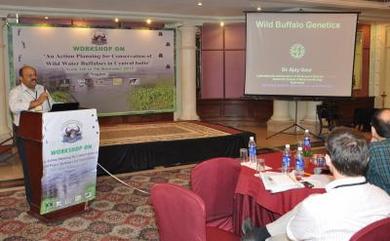 Together with the State Governments of Maharashtra and Chhattisgarh, Wildlife Trust of India and the Satpuda Foundation, we hosted a workshop in Nagpur, India, on the 5th-7th November 2012, to discuss the future conservation of the Endangered wild water buffalo (Bubalus arnee).

The wild water buffalo population in the two states of Maharashtra and Chhattisgarh is less than 50. The total world population of wild water buffalo maybe as low as 200, a result of interbreeding with domestic buffalo. The majority of the world's population is in Northeast India, mainly in Assam. In Central India, wild buffalo are found in the Udanti-Sitanadi Tiger Reserve and the Indrawati Tiger Reserve in Chattisgarh, and in the proposed Kolamarka sanctuary in Maharashtra, which is connected to the Indrawati Reserve.

The workshop participants identified actions on how to protect the central Indian Wild buffalo population jointly across the two states. There was general agreement that there was a need to increase the size of the buffalo population, while consulting the Assam State Government.  Also, the effective management of the new Kolamarka sanctuary was identified as a priority. An action plan titled ‘Status Review & National Recovery Programme for Wild Buffalo in India’ is under preparation regarding the status and distribution of buffalo collected during the workshop will allow the IUCN Red List to be updated.

This workshop follows on from the Status Review meeting for wild cattle and buffaloes in 2011, which highlighted the need for action on this population of wild buffalo. The conservation planning processes of the IUCN SSC Sub-Committee for Species Conservation Planning laid the foundation for both meetings. 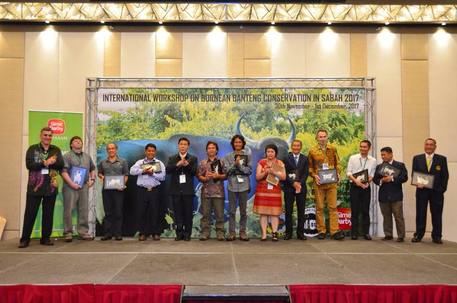 The 'International Workshop on Bornean Banteng Conservation in Sabah' ran from 30th November-1st December 2017. Organised by Danau Giriang Field Centre (Cardiff University) and Sabah Wildlife Department, with input from AWCSG and funding from Sime Darby Foundation, this workshop resulted in the publication of a 10-year State Action Plan for banteng. This was soft-launched in September 2018.

The partnership with the Indonesian Ministry of Environment and Forestry has developed beyond the National Strategy and Action Plans for banteng, anoa and babirusa to the One Plan Approach to species conservation. This means including the Indonesian and international zoo community. The Action Indonesia Global Species Management Plan collaboration focuses on implementation of in situ and ex situ conservation, while continue planning at workshops every two years.